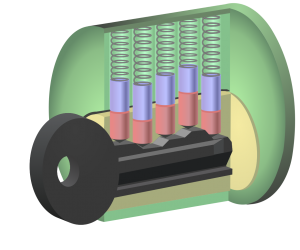 Lock bumping, or key bumping, is a key tool in the arsenal of the home invader.  It’s a skill that more and more potential burglars are learning, and it’s a serious problem for you and your home security.

Lock bumping requires a special “bump key”.  It’s designed to force the pin stacks up, with the specially-designed teeth of the bump key transmitting an impact to the bottom pins in your lock.  The forces transmits to the driver pins, bumping them up for just long enough to allow the cylinder to turn, opening the door and defeating the lock.  While each lock requires its own type of bump key, it’s estimated that a simple set of 10 can allow criminals to open 90{98c926ef0b647bd2f23f2b4cdf6120dd587cc3c527db262d4fe5e050408f2853} of the most commonly used locks.  While noisy, the speed and success rate of lock bumping makes it an ideal tool for thieves.

The other problem is that lock bumping leaves very little signs of damage.  Your lock may be very slightly dented from the force of the bump, but the lock itself will work – and you may not even have the minor damage.   Most homeowner’s insurance policies need proof of unauthorized entry to pay out, and lock bumping often doesn’t leave enough of a trace.

How can you avoid this?  Most standard locks today are vulnerable to key bumping, but a high security lock can help avoid the worst-case scenario.  Any lock that doesn’t use pins is inherently bump-proof – an electronic lock, for example.  Security pins inside locks also make bumping significantly more difficult.  Trap pins, shallow drilling, side bars – there are a number of different pieces of tech that can make lock bumping far more difficult, if not impossible.

Your home security is one of the most important things you can invest in.  Spending a little extra money up front on a higher-quality lock can save you pain and anguish later.

Give us the opportunity, and we will go above and beyond your expectations to solve your lock problems.

We accept the following forms of payment: